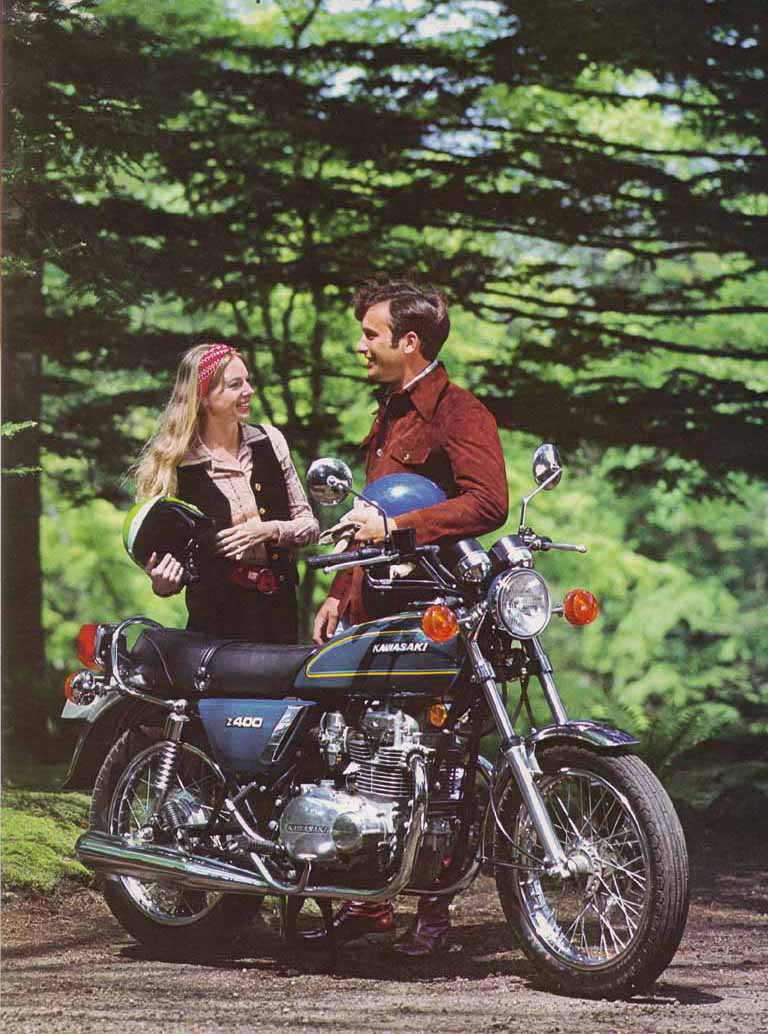 Where to find the serial numbers. (click the image to enlarge)

Bikes pruduced at the Lincoln Factory will have frame numbers from: K4-506001

Bikes produced at the Akashi factory will have frame numbers from: K4-044601

The engine numbers are from the same serial, starting at : K4E050601

The first number are the engine number

There were basically four models of Z400 twin the KZ400, the Z400D, Z400B and Z400G. The first two shared the early engine design which wasn't Kawasaki's best. Among other problems it used to strip the teeth off the balancer shaft drive on the crank which effectively totalled the engine. The motor was redesigned for the Z400B from engine number K4E139801 and was much improved. The Z400B can be easily identified from the earlier bikes as it has a tailpiece; the Z400G is the same as a B but has cast wheels. Not many parts are interchangeable between the early and late motors. The Z440 was a direct descendent of the B/G series and lots of parts will fit. The barrels and pistons are different, the cylinder head are the same, carbs are different.
Barrels/Pistons Z440 Barrels and Pistons can be put on a Z400 B, C, G and H bottom end and Visa Versa as both have the same stroke and lubrication system.

Cables all the same if same handlebar height used

Carbs. These cannot be swooped from model to model without a lot of work it is far better to correct the set you have than to change( For new Diaphragms call NRP who will fit new ones to your existing slides at a fraction of the cost of new ones)

Clutch Cover Late Z400/440s use same Clutch Covers. The early Z400 one can be made to fit if you shave off the edge next to the Generator and open up gear change hole and cover fixing holes

Forks can be exchanged as all are same diameter but as model progressed it went from drum to disc with a change in the bottom fork leg. And the bottom fork leg also changed between the different disc brake models, so you will need to either swap stanchions or fit correct wheel assy. Also the length of the fork tubes will vary between the different models.

Frame. You can fit any Z400/Z440 engine into any frame all are exchangeable but there are differences in the frames but with work all can be used.

Headstock (triple tree). All Z400/Z440s use the same headstock

Kick Start. The none Kick Start Models can have one fitted by fitting an early Case and Kick start Splines and Spring though the kick-start itself changed so check if you have the right one (Early kick start swivel at top Late swivel from bottom)